I have been reliving my recent trip to west Africa as I look through all the pictures my husband just finished.  He was the "official" photographer on the mission trip we were a part of, so he has over 9,000 shots from the span of 10 days!  And let me tell you, I am so glad.  It is amazing to be able to look at a picture and recall the feeling of the sweat dripping down your face, the gritty dirt in your shoes, the smells that only Africa can produce...

And the unexpected friendships.

One of my favorite days on the trip included a bus ride out of town to a real-live African village - mud walls, grass roofs and all - where we just got to be with the people.  We rode into their village in a rumbly, European 4-cylinder van not knowing what to expect.  A whole bunch of whiteys piling out of a vehicle is a little strange in an outlying village in Sierra Leone, and some of these villagers had never seen white skin before.  Thankfully, before this visit, the local Fresh Hope Ministries team had begun a relationship with them and arranged this particular day of meeting.  We were bringing them a water filtration rig so that they could have clean drinking water for the first time EVER.  Clean water opens many doors of opportunity in countries outside America, my friends.

There was a big ceremonial meeting in the center building - everybody showed up.  Men and women, children, babies attached to their mothers' breasts, dogs, chickens, what have you.  It was quite a spectacle. Actually, I think WE were the spectacle. 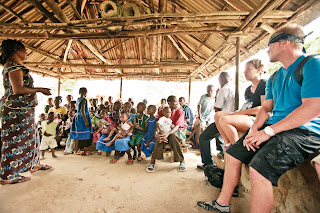 As the talking and interpreting dragged on, I began to notice faces, demeanors, body language.  There were a few women outside of the open-air pavilion sitting on a log.  One was a little older - hard to tell ages on their weary, lined faces.  I had assumed she was in her late 50's or early 60's, but the missionaries told me she was probably much younger.  The life expectancy in Sierra Leone is 48, if that tells you anything. 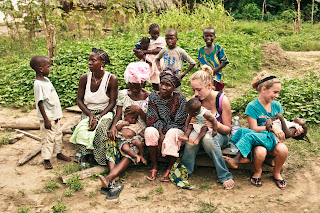 She seemed quiet.  Pensive.  Withdrawn.  My heart leaped toward her.  I got the impression that she was not the favored one, but that she had great beauty hidden inside. 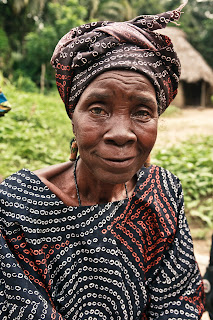 Our afternoon went on:  teach the people how to use the water filters and take care of them, laugh and play with the children, take pictures and show the people...receive hilarious laughter as they see themselves in the displays of our cameras.  And I still see that one woman off to the side.

I go talk to her.  English to Mende.  Sweaty white girl to skeptical Sierra Leonean matriarch.  She smiles at me, we exchange names.  I say hers all wrong.  Adama.  No, AdamAH.  She laughs at me and flashes the most beautiful smile.  Then she tentatively reaches up to wipe the ridiculous beads of sweat off the apples of my cheeks.  And she laughs at the whole situation again.

We ended up praying for the sick people there in the village.  It kind of just erupted without any particularly organized cue from anyone.  A woman brought her toddler son over to me and tried to explain in Krio what was wrong with him.  I prayed.  All of a sudden, I was surrounded by mothers bringing their children for prayer!  I was engulfed in the sounds of Krio, Mende and a few strings of broken English, but I prayed for them all.  It was exhilarating - like I was born for this, or something.  Tummy troubles were healed, headaches dissipated and more than we'll ever know went on during that spontaneous bubble of ministry. 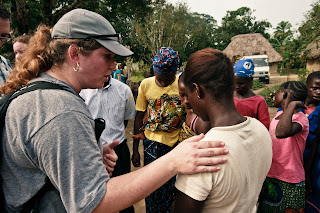 Then it was time to walk down to the river and see their water supply.  Our whole team and all the villagers set off on a quarter-mile hike down the dirt road to the river together.  I saw Adamah as we were passing the last building before the road and I called out to her.  I held out my hand to her, inviting her to come with us.  She looked at me a little sideways, not sure, but she came over and took my hand.  We walked the whole way like that.  No common language, not many common experiences, but friendship we both understood.  She became my friend. 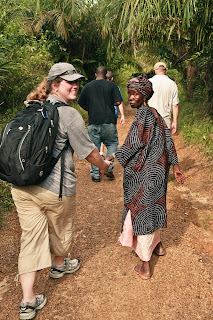 That was one of the sweetest walks I have ever taken - hand in hand, deep brown skin to my pasty white, the cords of friendship entwining us together, and - I pray - the presence of the Holy Spirit extended from my heart, healing hers.

That day ended all too soon, even though I was weary and spent in every way.

Well, it just so happened that we were slated to return to that same village!  We came back the next night with a generator, a large white drape and some poles....and the Jesus Film in Krio.  What an experience!  All the people in the village were excited to see us again and they ran up to the van as soon as we pulled in.  Everyone was busy unloading gear and getting set up, when a village woman grabbed my hand and pulled me over to the side shouting "Adamah!  Adamah!"  She took me straight to Adamah and sat me down beside her on a bench so we could watch the movie together.  Adamah smiled with that amazing smile as soon as she saw me.  Her face lit up and she grabbed my hand.  And while I was taking in the sweetness of that moment, I got sardined in the middle of the makeshift bench with about 6 other village women.  Up close and personal, let me tell ya.  At that point in the trip, my deodorant had given up the ghost, so I just fit right in. 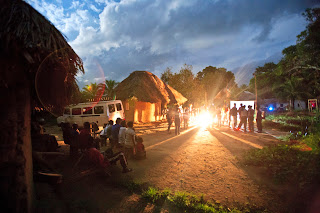 There's so much more I could tell you about that night.  The expressions on the faces as they drank in the life of Jesus on film.  The people who stayed out - even when it started raining - and wanted to give their hearts to Jesus.  The divine appointments.  The 23 wet people crammed into a 4-cylinder Euro van that clearly states: 16 passenger maximum.  Riding in said Euro van as we traverse a wet, muddy road and attempt to cross a river on a shifty and somewhat hidden log bridge....

But the main thing I am treasuring from that whole overwhelming experience is the wonder of friendship in a very unexpected place.  God, watch over Adamah, my padi.  (pah-DEE - "friend" in Krio) 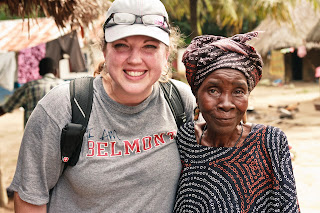 Posted by Crista Ashworth at 11:50 PM